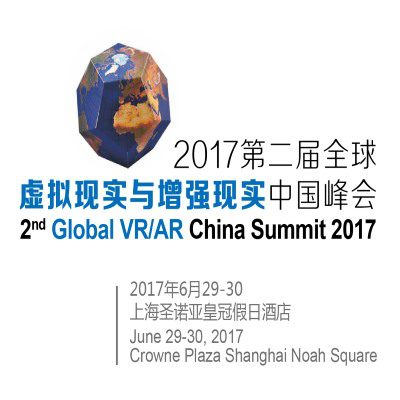 EuroVR Association renews its partnership with the Global VR/AR China Summit 2017, which marks this year its second edition.

EuroVR members can benefit from a 20% discount on the registration fee.

In 2016，VR/AR went viral and became the worldwide buzzword, various high-tech giants made strides into the VR/AR sector one after another and rolled out their products. Investment enthusiasm, however, has faded somewhat due to public sentiment and ever-changing investment appetite since the second quarter; consumer-oriented market slid into doldrums and more interest has shifted toward AR, the industry entered a technology-based shape-up period. But market players remain upbeat about VR/AR, according to data published by IDC in August 2016, global income in VR/AR industry looks set to hit 162 billion USD in 2020 from the 5.2 billion USD in 2016.

VR/AR showcasing facilities and low-end products has successfully completed education to the market, interest has spread from tech-Geeks and fans to average consumers, more opportunities emerged for VR/AR applications in gaming and entertaining arena; on the other hand, huge development room lies ahead for B2B market, more and more firms are conducting in-depth development in the B2B sectors, more viable business mode are being explored by VR/AR applications in various industries, with more VR/AR products hitting the market this year, 2017 is expected to become a year when VR/AR ecology system is taking shape. Against this backdrop, the 2nd VR/AR event is coming back again!

During this event, we will arrange a special road show /demo show for startups to attract attention from leading PE/VC investors and media, and there is a co-located exhibition show for global VR/AR leaders to show their cutting-edge technologies and products. We will also arrange 1-on-1 meetings for our exhibitors and sponsors, to provide a bridge for their global partnership and product distribution channel development in China. Most importantly, we will host a VR/AR industry award ceremony to commend those companies which has made outstanding contributions. We believe this event will be an ideal platform for VR/AR industry communication and partnership, each participant can get global market updates, obtain newest product and technology information, promote their own product and brands, explore potential clients, seek business partnership, and step towards the top of the mountain with the global VR/AR market booming in 2017!